HomeUAE News33 people were killed and 40 injured in a bus crash in...
UAE News 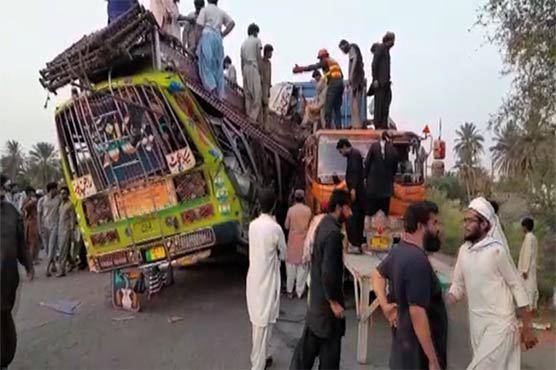 The bus carrying most of the labor hit a container truck on the highway.

On Monday, a speeding bus carrying most of the workers home on a busy highway in central Pakistan crashed into a container truck, killing at least 33 people and injuring 40 others, police and rescue officials said.

The bus has left Sialkot and is driving on Taoenza Road; Senior Police Officer Hassan Javid said its destination is Draghazi Khan in eastern Punjab.

He said that the exact cause of the accident is still under investigation.

Rescuers took the dead and injured to nearby hospitals. According to Sher Khan, head of the rescue team, some of the injured are in critical condition. He said the bus driver was one of 33 people killed in the accident.

Khan said the passengers were heading to their hometown of Rajanpur to celebrate the upcoming Eid al-Adha feast.

Television footage and photos circulating on social media showed rescuers trying to pull the dead body from the heavily damaged bus. In one photo, some injured people are sitting near the bus, waiting for medical assistance.

Pakistani Information Minister Fawad Chowdhury expressed condolences on Twitter and advised public transport drivers to be more careful about the lives of those entrusted to them.

“As a country, when will we realize that violating traffic rules is fatal?” he said.

Due to weak road infrastructure and ignorance of traffic laws, fatal accidents frequently occur in Pakistan.