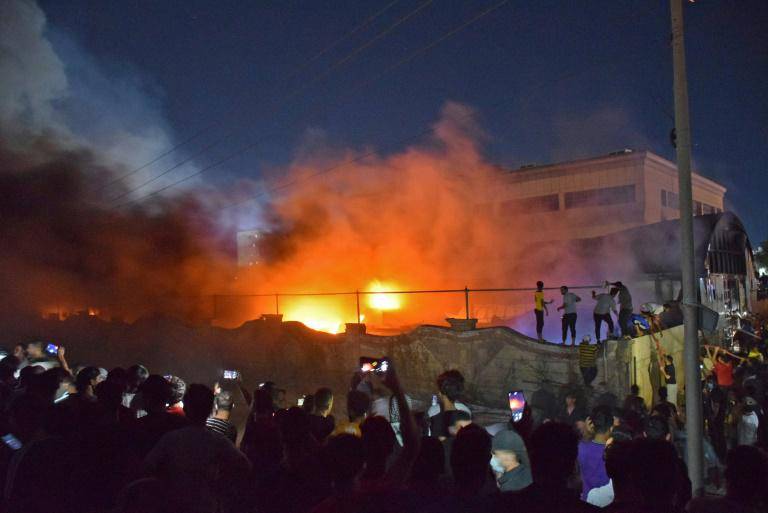 The initial police report indicated that the explosion of the oxygen tank in the Covid-19 ward of the hospital may have been the cause of the fire.

Health officials and police said on Monday that an oxygen tank explosion in a coronavirus hospital in the southern Iraqi city of Nasiriya could cause at least 44 deaths and more than 67 injuries.

His office said in a statement that when rescuers searched smoke-scorched buildings to find more bodies, Prime Minister Mustafa Kadimi held an emergency meeting with senior ministers and ordered a suspension and arrests. Health and civil defense managers in Nasiriyah.

The statement added that the hospital manager was also suspended and arrested.

Iraq’s medical system has been hit hard by the war and sanctions, and it has been struggling to deal with the coronavirus crisis, which has caused 17,592 deaths and more than 1.4 million infections.

A Reuters reporter said at the scene of the fire: “Medical staff carried the charred body out of the burning hospital, and many patients coughed from the smoke.”

Health officials in Nassiriya stated that the search operation at Al Hussain Coronavirus Hospital continued after the fire was brought under control, but the heavy smoke made it difficult to enter some burnt wards.

A health worker told Reuters before entering the burning building: “The raging fire has trapped many patients in the coronavirus ward, and rescue teams are trying to get close to them.”

A police officer at the fire scene said that the initial police report indicated that the explosion of the oxygen tank in the Covid-19 ward of the hospital may have been the cause of the fire.

“I heard a big explosion in the coronavirus ward, and then the fire broke out very quickly,” said Ali Muhsin, a hospital guard who was helping to remove the injured from the fire.

In April, an oxygen tank in the Covid-19 hospital in Baghdad exploded and caused a fire, killing at least 82 people and injuring 110 others.

Health sources said earlier that as many patients are still missing, the death toll from the fire on Monday may rise. They said there were two health workers among the dead.

A Reuters witness said that angry relatives gathered in front of the hospital to clashed with the police and set fire to two police cars.

Iraqis are tired of political violence and have frequent accidents due to insufficient investment, corruption and damaged infrastructure. During the coronavirus crisis, hospitals have been struggling to cope with the influx of patients and shortage of supply.

“Corrupt officials must be held accountable for the fire and the killing of innocent patients. Where is my father’s body,” said a young man as he searched for the charred body wrapped in a blanket in the hospital yard.