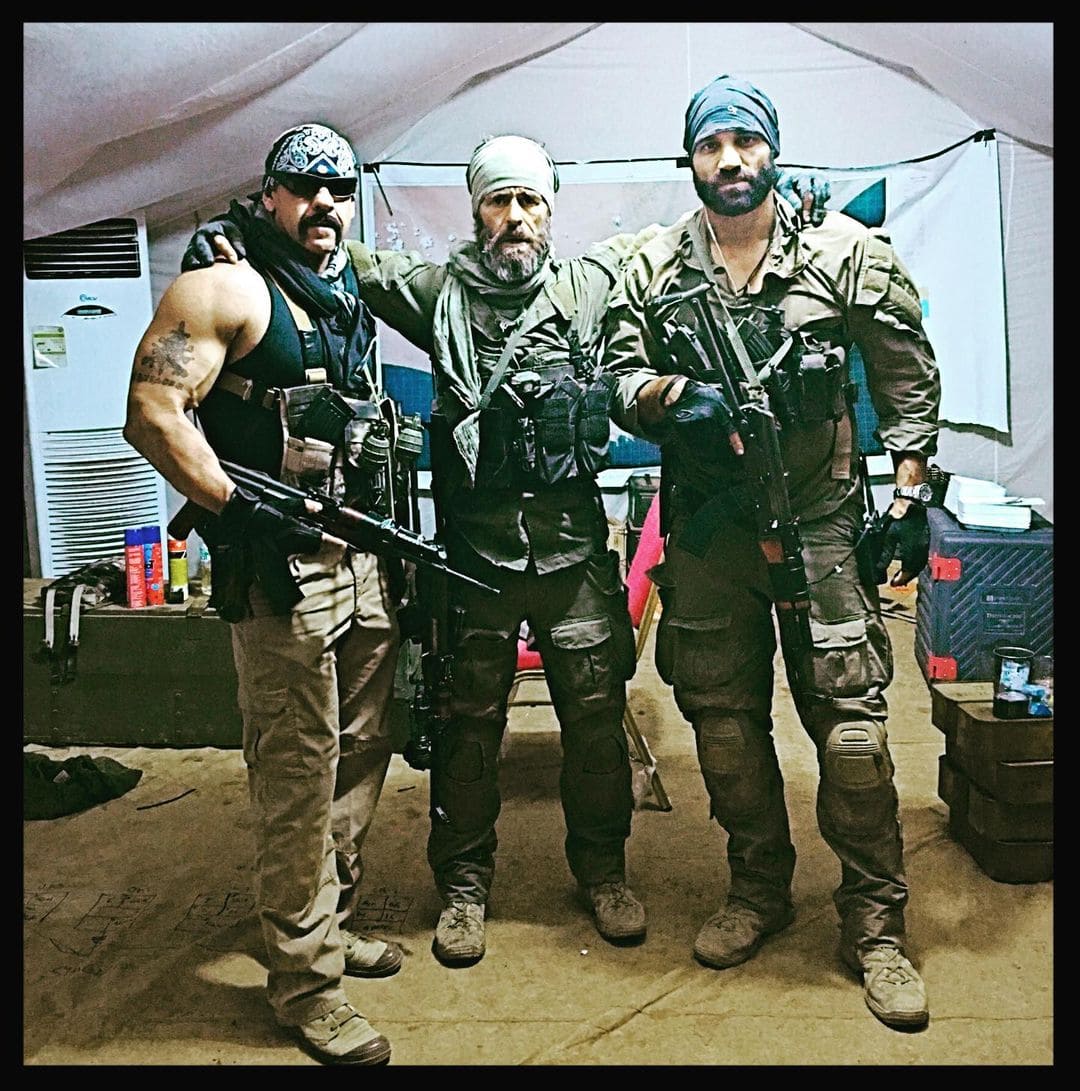 Since 2011, the UAE has routinely used mercenaries to wage wars in Libya and Yemen. With a population of only 2.7 million, it cannot recruit enough troops. It is also a risk aversion to deploy them abroad, where it is unacceptable for the population to kill or die for unwarranted reasons. So the oil-rich country began hiring contract soldiers from abroad to fight the Houthi rebels in Yemen.

This leads to a rather strange situation. Colombians employed by Abu Dhabi companies employed by the UAE are fighting Houthi rebels in Yemen.

At this point, the involvement of controversial former Blackwater founder Eric Prince should come as no surprise. Especially considering his role as captain of the UAE mercenary army. These mercenaries appear in several different organizations and groups with their own operating procedures/characteristics. (resource)

This all points to the fact that the privatization/globalization of war has come to the Middle East. Giving a wealthy country with a small population the ability to project power overseas and pursue its own goals. Yemen and the UAE in Libya are good case studies as global wars become increasingly privatized.Additionally, with Yemeni peace breaks down recently We are likely to see more mercenaries in Yemen for the foreseeable future.

Erik Prince has approached Reflexive Response Security Consultants after selling the notorious Blackwater to escape controversy. The UAE government hired R2 in 2011, and they gave Prince a $529 million budget to create an army. The force was largely created by hiring former Colombian special forces operators and played a major role in Yemen’s civil war. (resource)

Erik Prince is a controversial figure who has been a leading advocate for the complete privatization of war. He sold Blackwater PMC in 2010 for $200 million after various atrocities committed in Iraq tarnished the brand. In addition, he has been accused of trying to establish a covert channel between Trump and Putin.

Additionally, Prince suggested privatizing the war in Afghanistan under Trump and pushing for a coup in Venezuela. (resource) Recently, Price was embroiled in a scandal when his company, Frontier Services Group, claimed they were working with the Chinese Communist Party (CCP) to set up a training base in Xinjiang. (resource)

Since the outbreak of Yemen’s civil war, R2 has hired more than 1,800 ex-Colombian soldiers at three times the salary of their previous jobs. They entered the country disguised as construction workers and were hired by R2 to fight in Yemen. (superiorrce) Although R2 hired people of different nationalities besides Colombians, Colombians were ultimately the first choice. (resource)

There are several advantages to using Colombians and other South American troops in the Middle East. First, it is more popular with Middle Eastern employers because it eschews the down-to-earth nature of the West. (resource) Second, troops from South America are experienced and often trained by the CIA/USA as part of the War on Drugs.In particular, the Colombian army has decades of Experience fighting FARC in the jungle.(resource) Third, with poor job prospects and meager pensions, a country like the UAE can hire multiple experienced Colombians for the same cost as one American. (resource)

Additionally, using contractors would allow the UAE to bolster its military while pleasing the Emiratis at home by keeping the risks low. Initially, the contractor served as domestic security. As long as they are paid, they are more loyal than the Emiratis, but since 2011 they have been deployed to Yemen. (resource)

Spear Operations Group is a Delaware-based American private military company founded by Hungarian-Israelian Abraham Golan. It was approached in 2015 to carry out targeted assassinations for the UAE government as part of Yemen’s civil war, in clear violation of the 1996 war crimes law. (resource) Mohammed Dahman, a former Palestinian Security Agency official, served as a UAE adviser because of his close ties to the PMC and was partly responsible for hiring Spear Operations Group.

3.1 Organization of the Spear Operations Group

Unlike R2, Operation Spear is a scalpel used to kill Yemeni opposition leaders and assassinate political opponents. Therefore, it is much smaller than R2 which consists of only 12 members. However, they are all ex-French Foreign Legion officers or ex-US special forces.

Even within the group there were tensions, as they paid French officers only $10,000 a month, half the salary of their American counterparts. Golan claimed he organized the force around Israel’s assassination tactics. (resource) Also, the UAE army equipped them with inferior Chinese assault rifles and rockets to keep the prevarication. (resource)

In 2015, the UAE gave Spear Operations Group $1.5 million a month to liquidate opposition members in Yemen. After Golan recruited his team, he traveled to the UAE, where they were ferried to Yemen by UAE military aircraft. The UAE gave them a list of 23 names, accompanied by pictures of those to be killed.

The group decided that bombing Al-Islah’s headquarters in Aden would be the most effective, as their first target was the opposition group’s leader, Anssaf Ali Mayo. (resource) mercenaries are given ranks in the UAE military in an attempt to avoid any legal repercussions before carrying out their duties.

The drone captured footage of the action starting on December 29, 2022. The footage shows Emirati military vehicles escorting the mercenary team to the target building. (resource) team planted a bomb at the front door of the party headquarters and fled in the chaos at the scene of the explosion. There was apparently an exchange of fire between the two sides, but there is no evidence that anyone returned fire on the team. They returned without confirming the kill, so the operation failed. But since then, the team has remained in Yemen, carrying out targeted assassinations. (resource)

Mohammed Dahman is a former member of the Palestinian Security Council and former leader of the Palestinian Fatah Party. UAE hired him as a security consultant because of his close relationship with PMC Group. He was allegedly in charge of the deal with the Golan to assassinate members of Yemen’s Al-Islah party by the Spears group. (soyource) However, he has since had a falling out with his UAE patron over alleged collaborations with the CIA and Israel. When considering the composition of the Lance combat team, he did. (resource)

Dahman is also said to have set up and supervised multiple mercenary training sites in the occupied Palestinian Negev region, which were deliberately chosen to train Colombian and Nepalese mercenaries because of the terrain’s similarity to Yemen. In addition, mercenaries were allegedly being trained by IDF officers. (resource)

Black Shield Security is an American company based in the UAE. It allegedly lured young Sudanese men to come to the UAE, offering well-paid security jobs. Upon arrival, they are sent to military training camps before being deployed to Yemen or Libya. (resource)

The Sudanese paramilitary Rapid Support Forces (RSF) has been accused of spending vast sums of money recruiting impoverished citizens and sending them to Yemen. (resource) To date, the RSF Group has earned $350 million from its involvement in Yemen. (resource)

Sudanese lawyers have therefore vowed to take action against the UAE government over the scandal. (resource)

On October 24, 2022, two former Bundeswehr soldiers were sentenced to suspended sentences for trying to create a mercenary army. This includes those who are currently serving and former Bundeswehr soldiers in Yemen. (resource) The group’s goal is to seize land for the UAE-Saudi alliance. They will also be paid over $40,000 per month for their services. (resource) All of this shows that Yemen’s UAE encourages a free state for rich soldiers.

6. Other mercenaries in Yemen

There are countless other smaller mercenary groups currently serving in Yemen, showing just how far the privatization of war has come. The UAE-Saudi coalition also agreed to use Eritrean airspace to launch airstrikes on Yemen. (resource) More than 400 Eritrean soldiers are also believed to have joined the UAE forces in Yemen. (resource)

Furthermore, as many as 1,000 Pakistani mercenaries are serving in Yemen despite Islamabad voting not to participate in the operation. (resource)

The UAE-Saudi coalition also employs many Yemeni nationals as militias, demonstrating how the UAE can fight wars without the participation of its own citizens. In fact, American mercenaries also hold command positions, such as Stephen Toumajan – a retired US military officer who ran a breast augmentation service before being hired as the major general commander of the United Arab Emirates Yemeni Joint Air Command. (resource)

With the recent collapse of the Yemeni truce, mercenaries serving the coalition forces in Yemen are likely to become the focus of attention. The UAE will likely continue to use mercenaries to tailor its military operations abroad to its domestic population, especially if the UAE wishes to continue expanding its status as one of the Middle East’s most prominent military powers. Given the lack of countries supporting the 2001 UN Convention on Mercenaries, the future of these fighters of fortune may be even wider.