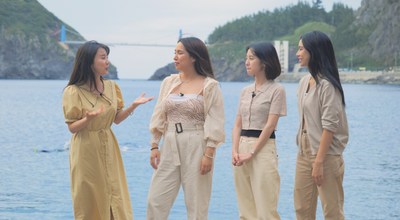 Seoul, Korea, November 23, 2022 /PRNewswire/ — Gyeongsangbuk-do and Arirang TV have co-produced “Busqueen,” a tourism promotional entertainment program for Gyeongsangbuk-do that features global celebrities. This year’s Busqueen season, the sequel (Season 2) of Busqueen, which first aired in 2021, will begin in Pohang, a city famous for filming Korean dramas such as “When the Camellia Blooms” and ” Hometown tea ‘Cha-Cha’, and shows traversing across the province, including remote Ulleungdo and Dokdo, showcase aspects of North Gyeongsang.

In Season 2, beauties from four different countries embark on a spontaneous and fun journey as street performers.The cast includes returning Jyunki from season 1, a famous singer in Japan China (wanghong) comes from a K-POP background, NC.A, a Korean singer known for his OST in “Reply 1988”, Nalu, a K-Pop YouTuber with 1.37 million subscribers and Bestie, a singer from Popular YouTuber in South Korea Thailand.

The background of this season will be Gyeongsangbuk-do, the birthplace of Korean traditional culture, traces of Confucianism, Buddhism and Christianity, and beautiful natural scenery rich in mountains and seas. While season 1 focused on the traditional culture of Gyeongju and Andong, season 2 will focus more on the natural scenery featuring the ocean and islands. Notably, the show will feature Ulleungdo and Dokdo, remote areas that foreigners cannot easily access in South Korea.

There will be quizzes and challenges throughout the program, and the program will guide the audience to guess the answers in the process of participating in the challenges. It is also fun to get new information from questions and answers that even the locals do not know and even foreigners may be confused through the quizzes related to Ulleungdo and Dokdo. Every now and then, the harmonious and beautiful singing of Korean actors and foreign actors will be touching, as the show lives up to its title “Busqueen”.

Listening to the singing of actors, Ulleungdo in the background of street performances is like a scene in a movie, allowing foreign audiences to discover a new side of Gyeongsangbuk-do that they had not encountered before as tourists. In addition, the virtual studio will be used for the two singers to sing against the background of Dokdo. This showcase will use the Metaverse to allow everyone in the world to visit Dokdo virtually.

In addition, in the finale of the world-renowned “Squid Game”, the scene where actor Lee Jung-jae, who won the Primetime Emmy Award for Best Actor in a Drama Series, turned around before boarding the plane was also impressive. Filmed in Pohang, Gyeongsangbuk-do. Not long after this scene was filmed, Ulleungdo ushered in the best year for squid fishing in the past two years, and it was the first time in 10 years that such a high fishing volume occurred. As a program that combines street, travel, and entertainment centered on world-renowned media professionals and K-POP singers in an area with high positive energy, it is expected to contribute greatly to the international reputation of Gyeongsangbuk-do. Foreign tourists in Sangbuk-do.

Magic Avatars and Lensa AI Apps: Everything to Know