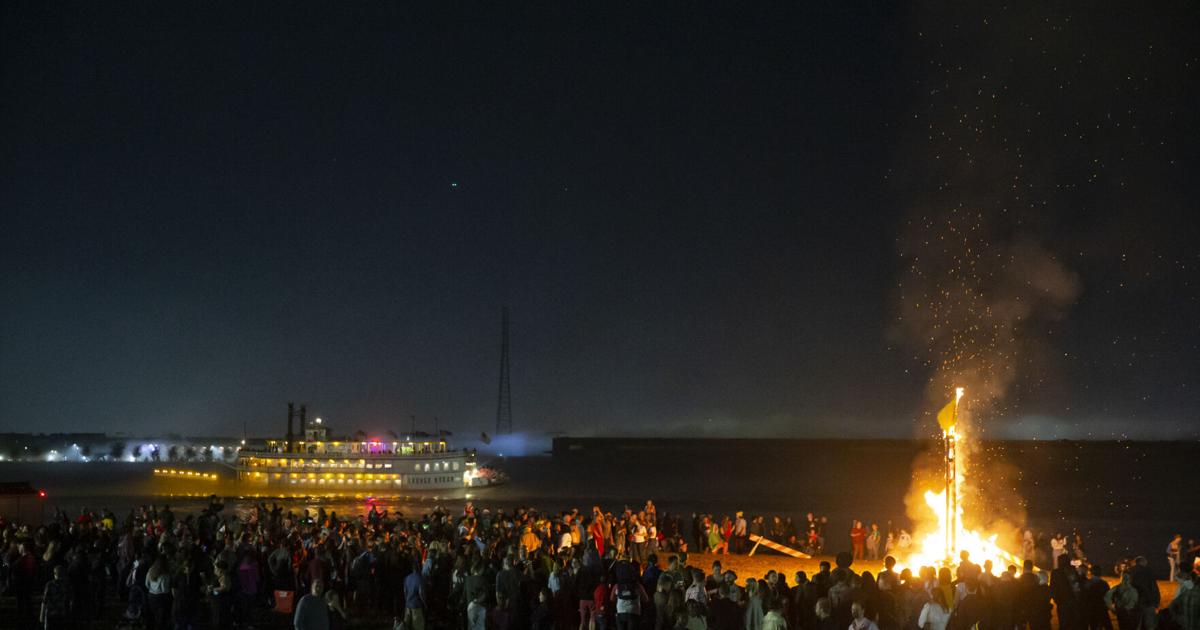 The Algiers Festive Bonfire is a beloved community tradition that kicks off the festival with music, food and a festive atmosphere with a giant bonfire on the embankment. While everyone loves the excitement of watching a bonfire burn, few understand the planning and enthusiasm that went into building these “campfire sculptures.”

Join the fire-loving NOLA Burners who have been designing and building Algiers Bonfires for the past seven years. NOLA Burners, a New Orleans-based group that make the annual trek to Burning Man in the Nevada desert, had the idea of ​​building something big and then burning it down.

They bring a high level of burning sophistication to the Algiers event, and the bonfire structure is much more than just a pile of logs. Each one starts as a concept on paper. Once a design is selected, exact specifications are determined with the help of a computer program that generates a 3D rendering of the design. Computer models helped builders view campfires from all sides and create blueprints for the most intense burns possible.

“We put a lot of effort into the look and feel, but in the end, it’s more of a performance piece than a sculpture,” said Brennan Steele, a NOLA burner who has built and burned There are more than 30 bonfire sculptures. “It’s most beautiful when it’s burning.”

Steele was responsible for the technical design work and created computer drawings. Most of the campfire’s components were built at a local warehouse and trucked to the burn site for full assembly, he said.

Each year, the campfire is a unique piece of art, says NOLA Burner and campfire artist Eric Arvidson, who owns about 60 campfire sculptures. He is responsible for creating the concept and theme of each Algiers Bonfire. This year it’s a tribute to the traditional pyramid-style bonfires built along the embankment in Upper River Parish in New Orleans to celebrate Christmas Eve. At nearly three stories high, the bonfire was the tallest ever built for the event. It’s all about one fire, he said.

“We’re doing a modern take on an older design,” Arvidson said. “We covered the outside with a herringbone pattern and different designs, so it doesn’t look like just stacked logs.”

Avicen and Steele collaborated frequently, and together they built and burned more than 20 campfire sculptures. Some of them have been trucked as far as the Nevada desert before being burned. They did this with the help of a small group of “burners,” who were equally satisfied with building something and then watching it burn.

In previous years, they built and burned a replica of a Victorian house, a 20-foot-tall Louisiana cutout and a giant Christmas pyramid on the Algiers embankment. Last year’s bonfire was two stories high with candles.

“People always ask me if I regret seeing my work go up in flames,” Arvison said. “When I saw it finally collapsed on its own and there was nothing left, it gave me real satisfaction.”

The annual Algiers Holiday Bonfire and Free Concert is scheduled for Saturday, December 3rd on the dike at Cape Algiers. The event will feature an expanded festival art market, more food vendors than ever before and the festival’s largest bonfire ever. Festival organizers have moved the time forward by an hour to accommodate those who go to bed early.

Kelsey Foster, executive director of the Algiers Economic Development Foundation, said it was the best way to celebrate the holidays. She said last year’s campfire had the highest attendance ever and they hope to build on that success.

“We’re going to give it our all this year,” Foster said. “After two years of COVID and Hurricane Ida, we feel like we’re finally back on track, and we want to celebrate with a lot of fanfare.”

Music will be provided by the Young Pinstripe Brass Band and the Edna Karr High School Marching Band. The All Saints Catholic Church choir will sing Christmas carols.

More than two dozen local artists and craftsmen will set up shop at the art market, and a variety of food vendors from across the West Bank will offer a plentiful selection.

Foster advised people on the east coast to take the Algiers Ferry across the river to the Bonfire, since parking at Cape Algiers is difficult. The Regional Transit Authority is increasing ferry capacity for Bonfire, she said, but still recommends getting there early to catch all the music, browse the businesses and food vendors, and watch the sun set behind the city skyline. The exact time they light the bonfire is confidential, so don’t be late.

Where: Algiers Point at the embankment, about 200 Morgan St.