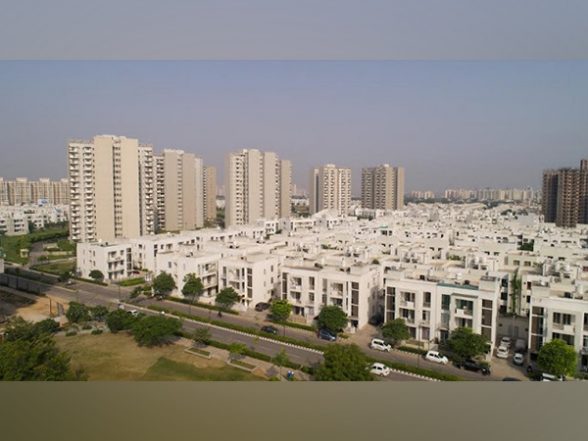 In India, the real estate price index has been growing steadily over the past few years. The All India House Price Index (HPI), published by the Reserve Bank of India (RBI), grew at an annual rate of 3.5% in the quarter ended June (Q1 2022-23), and was up 1.8% year-on-year in the previous quarter.

While China is now taking steps to revive its real estate sector, property investment firms like Singapore-based CapitaLand Investments (CLI), which has a third of its assets in China, are looking to diversify their portfolios. CLI lists Vietnam and India as possible destinations for future investments.

With the real estate sector accounting for about a quarter of China’s $17 trillion economy, concerned Chinese authorities have been rolling out measures over the past few months to instill confidence in the collapsing sector. In early November, regulators rolled out 16 support measures aimed primarily at boosting developers’ liquidity, in the industry’s most comprehensive rescue package since last year’s debt crisis hit hard.

Key measures include allowing banks to extend maturing loans to developers, supporting property sales by reducing the size of down payments and lowering mortgage rates, promoting other financing channels such as bond issuance, and ensuring the delivery of pre-sale homes to buyers.

Some analysts say the support measures are the strongest signal yet that a two-year crackdown on the housing sector is over.

UBS chief China economist Wang Tao told CNN that the package of measures is a “turning point” for China’s real estate sector. Together with other policies announced earlier this year, she estimates that more than 1 trillion yuan ($142 billion) could be injected into real estate.

In August 2020, the Chinese government began trying to rein in excessive borrowing by developers to control soaring housing prices. The move rattled the property market as Evergrande, China’s second-largest developer, defaulted on its debt. With the real estate industry collapsing, several large companies have turned to creditors for protection. A cash crunch has meant work on many pre-sold housing projects across the country has been delayed or suspended.

China’s real estate sector has been battered as developers linger in crisis and stop building apartments as they run out of money. Real estate prices and transaction volumes fell. In addition to rising debt among developers, China’s strict COVID policies amid rising coronavirus cases have also affected manufacturing and consumer spending.

The crisis got worse in the middle of the year, when angry homebuyers refused to pay mortgages on unfinished homes, sparking fears of contagion and spooking financial markets. Since then, authorities have tried to defuse the crisis by urging banks to increase lending support for developers so they can complete projects. Regulators also lowered interest rates to restore buyer confidence.

According to China’s National Bureau of Statistics, the average price of a new home in China’s 70 major cities fell 1.6% year-on-year in October 2022, after falling 1.5% a month earlier. It was the sixth straight month of declines in new home prices, the steepest drop and the fastest decline since August 2015.

Sales of the 100 largest property developers fell 26.5 percent in October from a year earlier, according to a private survey by real estate research firm China Index Academy. Their sales are down 43% so far this year.

While applauding the government’s property support measures, analysts remain cautious about its impact on buyer confidence.

“The real estate market is yet to show signs of recovery,” Nomura analysts said in a research note last week, adding that the latest measures are likely to have a “minimal immediate impact” on stimulating home buying, adding that a zero-COVID strategy would have little impact on the sector.

While the measures are seen as supportive for the housing market, bankers and analysts say they can only address supply issues in the housing market, where demand recovery remains a key concern. Many people remain reluctant to upgrade their homes or buy new homes due to economic uncertainty and declining employment.

One company that is confident about the long-term future of China’s property market despite the current situation is Singapore’s CapitaLand Investments (CLI). It currently owns about one-third of its overall real estate portfolio in China, the majority of which is non-residential commercial real estate.

In an interview with Nikkei Asia, CLI said it plans to diversify its portfolio and is looking at investment opportunities in Vietnam and India. Its aim is to build resilience in areas such as supply chains and energy amid the shocks to globalization during the COVID-19 pandemic.

CLI’s largest shareholder is Singapore state-owned investor Temasek Holdings, one of Asia’s largest real estate investment management companies, with real estate assets worth US$90 billion and funds under management of US$63 billion

“We would love to do more in Vietnam, we are already very active in India,” Chief Financial Officer Andrew Lim told Nikkei. “Recent events have taught us that putting all our eggs in one basket can be dangerous…in an era of increasingly tested globalization.

Lim believes that post-COVID Vietnam will become an important destination for capital, especially in manufacturing. And India has huge solar resources. “If you’re looking at energy redundancy, energy resiliency, renewable energy, those are the markets, and suddenly it’s important from that perspective.” (Arney)