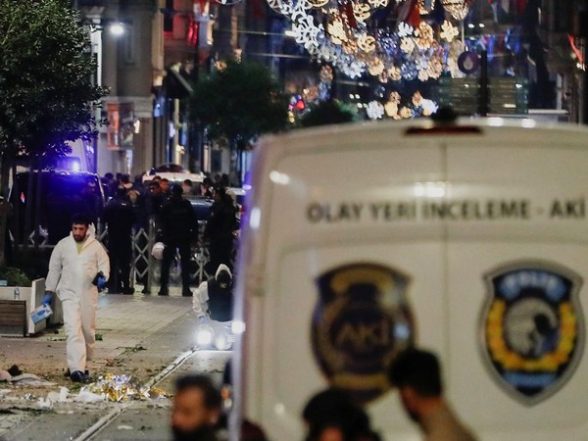 Nicosia [Cyprus], Nov. 21 (ANI): The Turkish government immediately blamed the outlawed Kurdistan Workers Party (PKK) and People’s Defense Forces (YPG) for the deadly bombing on Istanbul’s bustling Istiklal Street at 4.20pm on Nov. 13. However, there are strong suspicions that this may have been another false flag operation designed to serve the goals of President Recep Tayyip Erdogan.

The PKK and YPG have denied involvement in the attack, claiming the government used it as an excuse to attack Kurdish forces in Syria.

Six people, including two girls aged 9 and 15, were killed in the explosion on Istiklal Street, one of Istanbul’s most popular destinations for tourists and residents, and 80 others were injured.

Notably, Turkish authorities arrested the alleged perpetrator of the attack, a Syrian woman named Ahlam Albashir, in less than 24 hours and accused the PKK of being behind the bombing.

Justice Minister Bekir Bozdag told Turkish media that an Arab woman, later identified as Ahlam Albashir, was seen in security camera footage planting a suspicious package that was actually a bomb. She sat on a bench in the area for more than 40 minutes, leaving only minutes before the explosion.

Police said Albashir admitted that she had been trained by special intelligence agents from the PKK/PYD/YPG and had received instructions from Ayn al-Arab in northern Syria, where the group has its headquarters.

However, several things contradict the official narrative. For example, it is highly unlikely that a trained terrorist would wait 40 minutes with a bomb in a location monitored by hundreds of CCTV cameras. Moreover, if Albashir is Arab, as the police claim, there is little chance that she was recruited by one of the Kurdish armed groups, which so far have only used Kurds in their operations against the Turkish state.

Just a day after the deadly incident, Interior Minister Suleyman Soylu insisted that it was the work that brought down the PKK and its Syrian affiliate, the YPG.

He also accused her of fleeing to Greece if security forces failed to apprehend the alleged perpetrator. Tensions between the two countries have escalated as Turkey has repeatedly accused neighboring Greece of harboring PKK terrorists.

In addition, Soylu again accused Washington of supporting “terrorist groups,” saying the attack was carried out by the PKK, which is backed by the United States. Then, he categorically rejected the condolence message sent by the US embassy in Turkey regarding the Istiklal bombing. He added: “Receiving the condolences of the United States is like being the first to arrive at the crime scene.

However, not everyone is convinced of the Turkish government’s version of events. A senior Turkish official told Reuters that Turkish authorities did not rule out that the attackers had links to the Islamic State of Iraq and the Levant (ISIL).

Journalists and politicians have alerted the public to a series of bombing attacks in 2015 and 2016 that killed 862 people during parliamentary elections that Erdogan and his Justice and Development Party (AKP) used for their own benefit. profit in order to regain the right to vote. most.

They point out that the failed coup of July 15, 2016 gave Erdogan the opportunity to purge all his opponents from key government institutions and send thousands of people who were seen to oppose the AKP and its rule. go to jail.

The Turkish Minute reporter Turkmen Terzi noted that Turkish authorities did not rule out the bomber’s link to ISIS, adding: “However, it is more likely that this deadly bombing targeting civilians was carried out by Turkish President Recep Tayyip Erdogan in The G20 summit in Indonesia earlier this week was aimed at convincing world leaders of the need for Turkish military action in northern Syria.”

A false flag is defined as the deliberate misrepresentation of an attack or hostilities that obscures the identities of those involved in carrying out the operation while implying that another group or country is the perpetrator.

Sina Ciddi, a senior fellow at the Foundation for the Defense of Democracies (FDD), echoed Terzi’s views and said: “A government determined to suppress the media, limit the ability of individuals and journalists to ask legitimate questions, and peddle false accusations is an equally legitimate The interpretation is that this is the argument for a false flag operation carried out by Turkey’s ruling Justice and Development Party (AKP) … The Turkish government has expressed its intention to respond harshly to the PYD, presumably indicating a possible military invasion of northern Syria.”

Ciddi continued: “During the worst recession in the country’s history, a troubled leader who faced re-election in a few months could have engineered the perfect crisis to divert public attention from consumer inflation. Move to a firm stance on terrorism.”

“Even before the investigation was completed, Turkish officials were making the case for a new military operation in northern Syria,” said Belkei Mandraki, a senior analyst at the International Crisis Group.

It is worth noting that since October 2021, Erdogan has been trying unsuccessfully to give the green light to the Russian and American operation in Syria, and the deadly bombing in Istanbul gave him a good excuse to execute the operation and put it In retaliation for terrorist bombings. It also provided him with an excellent opportunity to shake off the negative focus of public opinion on Turkey’s economic woes and to rally ordinary Turks in support of the government. Erdogan now portrays himself as a strong leader capable of defending the country from terrorism. The question is whether enough Turks believe him and vote for him in next year’s elections. (Arnie)