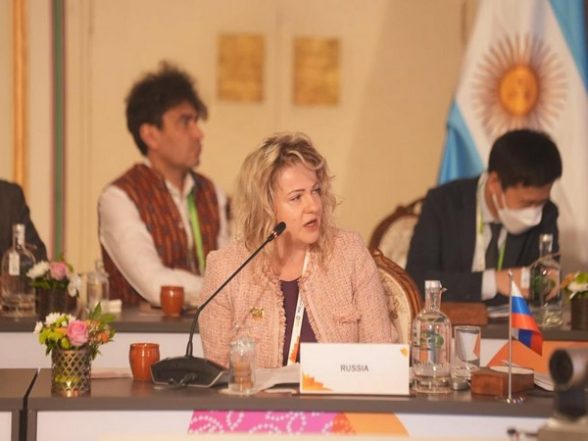 Lukash tweeted, “Thank you #G20India and @amitabhk87 for making ‘women-led development’ one of the main G20 priorities. Women are catalysts for positive change!”

As the first G20 coordinator meeting under India’s presidency kicked off in Udaipur on Tuesday, Lukash said digital transformation and innovation are key drivers of growth and development. She further said, “Therefore, #G20India proposes this as a cross-cutting theme for all G20 work tracks.”

In a series of tweets, Lukash said: “I was so inspired to meet the highly professional and engaging experts of the #G20India team! G20 is destined to succeed with their steadfast hearts and creative minds!”

“Frank discussion among #G20 facilitators is key to keeping the G20 active, efficient and results-oriented,” she added.

Earlier, Indian G20 coordinator Amitabh Kant, who chaired the entire meeting, said there had been frank and thought-provoking discussions with the Sherpas.

He tweeted that leaders from around the world not only discussed issues related to food and energy security, but also put great emphasis on progress on the 2030 Agenda.

“Frank and thought-provoking discussions with #G20 Sherpas on contemporary challenges facing the world, related to food and energy security, that affect the lives of people around the world, and tribute to #Agenda2030 @PMOIndia @MEAIndia Progress exerts tremendous pressure,” Kant said in a tweet.

“Our view is that we should have win-win cooperation between all of us. Developing countries, the global south and developed economies,” Kant told a meeting of G20 coordinators in Udaipur. “We need to build new approaches. This is a unique forum for both developed and emerging economies. So we need to build approaches that benefit the world on key issues,” he added.

Meanwhile, a Novgorod regional delegation led by Governor Andrei Nikitin began a working visit to India on Sunday, according to a statement released by the Russian embassy in India.

As part of its business mission, representatives of the region’s government and business community met with members of the Confederation of Indian Industry in New Delhi on December 5. They had an in-depth discussion on the prospect of mutually beneficial cooperation. At the meeting, Governor Andrei Nikitin presented the economic and investment potential of his region.

“Velikiy Novgorod was the first ancient capital of our country. It was created at the crossroads of trade routes, and today, in archaeological research, we have found objects from India more than a thousand years old. This shows that between us The country of trade and cultural exchange has always existed. Today, the Novgorod region is a great place for trade, cultural exchange and the development of industrial relations. We are located exactly between Moscow and St. Petersburg, the two largest centers of Russia, the largest agglomeration And companies here have the most convenient access to the two largest regions of Russia,” Andrei Nikitin noted, according to the statement. (Arnie)